This month, we covered TIME.  Thankfully, I managed to save time (hah!) searching for, making and adapting material for B as the theme coincided with the Gymnademics weekly home material.  It allowed us to reinforce numbers as B’s been sporadically saying 0 to 20 (in English) and 1-10 (in Chinese). We also dived into the concept of day and night, seasons and weather patterns as B loves pointing to the moon, sun, stars, rain, clouds, etc. 😉

Books. There are soooo many good books about time, numbers and weather. Reading books is even more fun now that he repeats most words and memorises familiar phrases that he likes. Here’s what worked well for us among the titles we could find in the library and had at home. 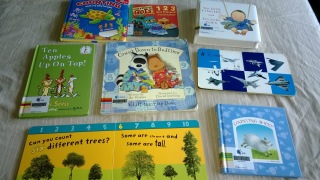 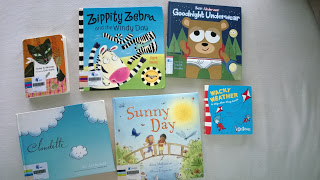 BTW, we really enjoyed “Only My Mom and Me” by Alyssa Satin Capucili which covers the days/seasons that a mom and child spend together.  But I had to return it to the library and haven’t bought it online yet 😦  Also, there’s many book-based activities from Margaret Wise Brown’s “Goodnight Moon,” a classic bedtime fave that shows how time passes before bed. Maybe we’ll try that in Sept….
Craft. We made a weather/week/time wheel to complement the theme.  B loves spinning it while saying the words and numbers. He’s also slowly learning how to manipulate the wooden clothespegs.

Music and Movement. When we reviewed the days and months, B would get stuck on Wednesday and had a tough time associating the months with “concrete” things.  These music videos helped! (Note: There are many out there online, these were the ones we liked more)
Chinese?! One day, B re-discovered our stash of bilingual flashcards, gleefully exclaimed “WOW!” and brought them over to read together.  Whenever there’s time at home, he would open box after box to flip through. I try not to repeat the cards and end leaving him wanting more.  He tends to say the English word when he sees/hears me read out Chinese characters, but he does vocalise some Chinese, esp. those he hears frequently from songs, conversations and his first set of Chinese storybooks.

Art:  Since this was mommy’s first year as a Singaporean, we hosted a casual National Day BBQ, jet flypast and fireworks watching at our place. B excitedly says “boom boom fire” and “zoom zoom airplane“ when he sees his artist impression proudly displayed on the art wall 🙂

Outings and Special Projects: This month, B visited Megabugs Return! and the Science Center (rather underwhelming, seriously in need of upgrading), the Art Garden @ SAM (again!) and theIstana Open House for Hari Raya and National Day. We also returned to the Esplanade for Hello Ling, the second in the PLAYtime! series, which dramatised the effects of light or in B’s words “sunlight, starlight, moonlight … and rainbows!” To cap it all, B made his first (?) science discovery, i.e. a simplified “taugeh” project to grow green bean plants over time (i.e. the 7 days in a week) with the help of water, air and sunlight.

Personal:
– When asked “What’s your name?”  He’ll say it all in one run-on word “bwxy!”
– Mr Manners. B calls “Hi, Thank You, Please, Good Morning, Bye, Day, Night (and Sleep Tight)” if prompted though once in while we’ll get a spontaneous “Morning/Bye uncle/aunty!” while in the lift, charming our neighbours (and some strangers). The family tree will come in handy for those Chinese titles and names!
– Potty training steps.  B regularly voices when he needs to pee and poop, does it in the toilet more often and has fewer accidents. Even though we’ve not yet gone all-in (i.e. he wears diapers/trainers when sleeping and when outside for extended periods), this has been so encouraging for us all. Yes!
– Hello, tantrums. Our gentle, observant 21 month old B has finally succumbed to his undeveloped cortex 🙂 Thankfully the tantrums are not frequent and rather predictable (i.e. he’ll say “No like! No want!” or throw a fuss when he’s upset, tired at end of day or had a poor nap, or wants to be independent).  I guess a happy, stimulating and secure environment with a balance of love and discipline is no longer enough at this age! B needs his autonomy, and we should “never help a child with a task at which he feels he can succeed.”  Maria Montessori said this best
– Gimme freedom! That’s perhaps why B likes music and movement so much.  I flip through the newspaper with him in the mornings, let him choose how many and which books to read, have regular messy, art and music playdates.  As his vocabulary expands, he’s forming more and more 2-3 word phrases to better express himself and is gradually overcoming his shyness to say words in Chinese and Malay too
“Today is Monday” everyday according to B, and it’s a delightful day!