This World Cup is B’s first introduction to the Beautiful Game.  None of us are diehard football fans, but there’s just something about these international sports competitions that just draws you in, and you can’t help but be caught up in the epic madness. In between watching the games, we’ve been kicking our football around the house, pretending to score goals! I also dug up one of my original poems to read to him – first published two decades ago, back in 1994. The love of sports spans generations 🙂 Olé, olé olé olé!

The hour hand touched four, my alarm clock rang
I stirred, then covered my ears with my hand
My eyes were shut but I struggled out of bed
415am? I’m fifteen minutes late!

I dashed out the room and stumbled down the stairs
My dad, in pyjamas, was already seated there
One hand holding a book, coffee in the other
Eyes on the TV, for one and a half hours

For a month, beginning June the eighteenth
Football was our food, and coffee our drink
We screamed and yelled and hollered away
And watched like addicts day after day

Most thrilling were the spectacular goals and tries
We watched amazed at Romario, Bebeto and Rai
Enthralled by the magic of the great Hagi
Debating who would win – Brazil? Germany?

It was a time for upsets, a time for new stars
A win meant some players received Mercedes cars
Some teams had finesse, others brute strength
But in the end, only the best will be champs

645am? Uh-oh, I’ve got school!
I grab my things and start wearing my shoes
But all day long, I’m still in a daze
Why? Because I’ve got the Cup craze

February ended with a roar, a dinosaur roar! Unlike space, transportation and animals which were easy hits back when we were doing monthly themes, I wasn’t sure how B would take to dinos – I mean, the names are hard to pronounce and animals are all dead and scary looking (except for Barney, but he’s not quite … real). By the end though, B was impersonating the T-Rex walk, wrapping his tongue around “triceratops,” “apatosaurus,” “stegosaurus,” and knew how to spell “D-I-N-O-S-A-U-R” with playdough. A success!

Lucky for us, there were TWO great dinosaur showcases in Singapore this past month, both different yet good.

We first visited Titans of the Past – Dinosaurs and Ice Age Mammals at the Science Center. To be honest, we’d trekked out west before for the Megabugs Return exhibit butweren’t too impressed. I felt the center overall could do with some upgrading. However, this time, we were pleasantly surprised by the toddler friendly activities and animations that managed to keep 2+ year boys entertained throughout! It’s a shame the exhibit is over so soon (25 October 2013 – 23 February 2014) and not that well publicized. When we went on a Thursday afternoon, there were less than 10 visitors there. Besides pressing all the buttons to make them roar and eat, B also enjoyed the mini paleontologists sandpit dig where they brushed for fossils. 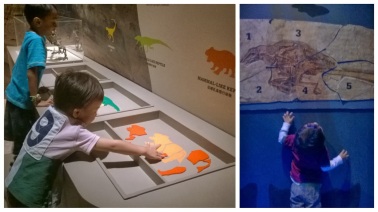 We also went to Dinosaurs: Dawn To Extinction at the ArtScience Museum (25 January – 25 May 2014), getting there just before 5p in time for the free English tour. IMO, the exhibits here were of better quality and clearer presentation, with bone fossils AND life size models, info boards and occasional activity stations. The caveat was we had to pay admission for B whereas he got in free (under 3 years) at the Science Center. That said, even distracted mommy retained a few bits of knowledge in between making sure my lil live dino didn’t break anything!

B attempted to fit all the puzzles, but most were set too high for toddlers – and he’s quite tall at 95cm+ (for 27 months). He also enjoyed the model of the walking T-Rex and the footprint section, where you could make your own track, identify and compare various footprint tracks.

Go here to see the other kid-friendly events and activities coming in March (booking required) if you have older kids, 6 years and up.

Some of our dino themed art, crafts and books: 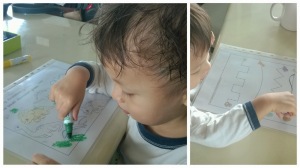 I’d been meaning to try both phonics as well as whole words with B, regardless of the ongoing debate. Besides daily reading, we started regular flash cards (real images, Doman style) with words spoken in English and Chinese after he turned one.  This has improved B’s focus and vocabulary – or at least his comprehension since he’s no talking encyclopedia. Yet, at 15 months.  However after initial alphabet attempts, the latest being Dr Seuss’s ABC: An Amazing Alphabet Book, I realised B needed something more “whole brain” to connect the abstract letters with concrete words.  By chance, we stumbled upon Zoophonics when a friend passed us her son’s used cards. I decided to give it a try after researching online and seeing this method adopted in Singapore (e.g. Growing Up Gifted, Zoo-phonics and Safari Preschools). If B remains interested after we run through all 26 lower case merged animal letters (what a mouthful!), I might get the full essential pack.

For now, here’s what we’re doing and why:

Zoo-phonics was developed in the mid 1980s by Charlene Wrighton and Gigi Bradshaw, two teachers in Northern California, who developed a strong phonics and physical component to enhance the existing whole language methods. Zoo-phonics introduces alphabet as one thing with 26 parts via a multi-sensory approach involving the whole child, eyes, ears, mouth, mind and body.

For 1-2 year olds like B, Zoo-phonics is taught via music and movement, animals and nature, all which he enjoys.  According to them, parents can start as soon as your child is ready to sit for a few minutes and listen to a story.  Teach the individual letter shapes and sounds of the lowercase alphabet with the Animal Letter Cards and Body Movements, which will lay the foundation for all future reading, spelling and writing. Show one Animal Letter Card at a time then reinforce all the letters you have taught previously with the fun games and activities.  Leave the Animal Cards where your child can find them easily and play with them daily!

These are 2 general approaches to boost speech and vocabulary: whole words and phonics. What I’m doing is combining the two when reading to B, supplementing with flash cards and picture books, using some of the tips for tots below (go here for more great reading material and tips!):

1. Your attitude and approach
– joyous and enthusiastic, approach it like a game or adventure
– teach at a time of day when both you and your baby are happy
– best duration for reading sessions is 30 seconds or less
– introduce new material when your child is ready for it – follow his lead
– be consistent with doing your program
– start as early as possible – the younger the child, the easier it is for him to learn
– go here for fun ideas on reading out loud to your kid

2. Size and orderliness of reading matter
– the younger the baby, the bigger print should be used!
– size of the print is crucial to your success – very young children have immature visual pathways
– if the print is too small they get frustrated because they have to work so hard to see the type
– make a gradual transition from large to small print and from words to couplets to short sentences to longer sentences one change at a time

3. Read with mom (or primary caregivers like dad or grandparents)
– Doman believes that parents are the best teachers
– their love and confidence in their children provide the best inspiration, regardless if they are with the child the whole day or working and able to spend just a few hours a day

4. Always stop before your baby wants to stop
– one of the most important rules: the child should be begging for more
– if your child gets tired after 5 slides, show just 4, but leave him hungry for more
– don’t bore your child!

5. Keep it fun, fresh yet consistent
– introduce new material often, show it quickly
– if no interest, show it even faster, update even more often (or use sound effects!)
– show less words more often and consistently than more words occasionally
– kids learn by repetition as long as you update your material often enough
– Doman believes testing is a sign of distrust, the opposite of fun. Though … there are games/tricks that can keep your spirits up by showing that your child is actually learning, and can be even more fun for him!